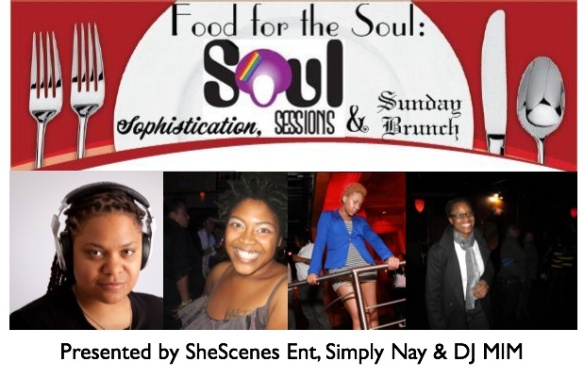 “Food for the Soul Brunch” at Tabaq

This month’s proceeds will benefit
*P.O.E.T.*

We do this using social media, visual and performance art, and the testimonies of those infected and affected by HIV/AIDS with the belief that the stigmas surrounding the pandemic will decrease and eventually disappear.

Free testing will be administered on the lower level; NO EXCUSES, NO YOUR STATUS!

Performing as a recurring feature in last month’s Revival Tour, B.Steady is making herself a household name and a viral phenom all in one setting. B is a songstress flimmaker, inventing her own form of popfolksoul music for queer people of color and folks with silenced struggles.  B uses vocal layering and simple melodies to tell stories about love, sex and life all to a rhythmic beat. www.besteadwell.com

A young poet on the rise in the Washington, D. C. area, Orville’s poems speak a vivid truth about the struggles of being an artist and staying constant and true to oneself. Orville the Poet writes poetry for the voiceless to address the issues no others will speak of, and to release pent up emotions with his pen. Poetry has become his breath of fresh air, his meditation, his therapy. His compelling words have been shared on several stages, in front of numerous audiences. Orville has been the featured poet at spoken word venues such as Busboys & Poets, Messiah & Friends, Indulj, Mood Lounge, and Jus Wine Cheese & Poetry. Orville also commits himself to Speak Life, a mentoring program whose goal is to empower young people to see themselves outside of their current situations through mentoring, counseling, and self expression through poetry.Orville is currently in the studio completing his first album, The Soul of a Man and working on a book of collected poems.

Be there, don’t hear about it later.

If you haven’t been to a brunch with the ladies yet, get ready for the best live performances by the hottest LOCAL  artists, poets and comedians, The Sunday Serve, DC’s best flavored mimosa’s and Award winning food.